Going into the final round tied with two others, Aksel got hot on the final nine, scoring 5 birdies to finish with a 6-under-par 65, breaking the JGTA Boy’s low score record of 66,  and shattering the tournament total record by 3 shots with a 203.

Aksel and his family spend the winters in Thailand, thus giving him the opportunity to play in the Junior Golf Tour of Asia events, returning to Richville during the summer, which allows for play in the states.

Congratulations Aksel!  We look forward to seeing you at Little People’s 2020 next June! 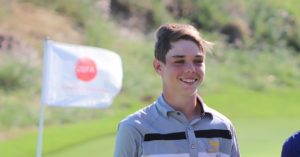 An email from a former Pepsi Little People’s player:

Hello,  Just wanted to drop a note and say I was a contestant in the first Quincy Pepsi Little People’s Tournament in 1974 age 14. This was probably one of the biggest events I could have ever imagined to be a part of and truly feel proud to say I was in the first one.

Marilynn Smith actually picked me out of the crowd and had me hit a ball for her. Pretty surreal. I was living in Keokuk Iowa. My Father a PGA Professional at the time at the Elks Club there.

My roots go deep in Quincy as my grandfather was the golf course Superintendent at Spring Lake CC from late 50’s to 1972, so I also have a passion for Quincy area.

Today I’m currently the Head PGA Professional at Ankeny Golf & CC in Ankeny, IA and just celebrated my Quarter Century Membership with The PGA of America.

Thank you for making a difference with junior golf and growing the game.

Pepsi Little People’s player Kylie Fisher has qualified for the National Finals for the Drive, Chip & Putt event, to be held in conjunction with the 2020 Masters, on April 5, 2020, at the Augusta National Golf Club!

Kylie, who hails from Tahlequah, OK, will compete in the girls 7-9 division.
Kylie played in the 2019 Pepsi Little People’s in June as an 8-year-old, and won her 3-G (8-9) Division by one stroke, shooting a 44 in the rain-shortened 9-hole event.
Congratulations Kylie, and best wishes for a wonderful and successful trip to Augusta next April! 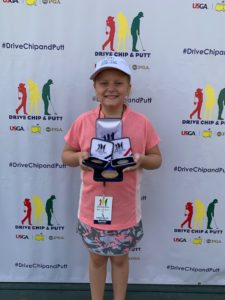 Pepsi Little People’s is pleased to announce that Applebee’s will again sponsor the ever-popular Parent-Child tournament and associated events in 2020!

The optional 9-hole Applebee’s Parent-Child will be played Sunday (Father’s Day), June 21, 2020, on holes #19-#27 at Westview Golf Course, Quincy, IL.  The alternate shot event is the kick-off to the 47thannual Pepsi Little People’s Golf Championships, which will be played June 22-24in Quincy.  The Parent-Child annually draws 60+ teams made up of one current Little People’s player and a parent, sibling or friend.

Applebee’s will also sponsor the Putting, Driving and Best Dressed Team contests, held in conjunction with the Parent-Child event.

In addition, on Monday, June 22, practice round day, Applebee’s will hold a Closest to the Pin contest on the 9th hole at Westview, with a $75 Gift Certificate from the Westview Pro Shop going to the winner.

An Applebee’s representative will be on hand at the Family Celebration Picnic on Monday night to present trophies and medals to the winners in all Applebee’s events.

“We are extremely delighted to have formed this partnership with Applebee’s,” stated Nan Ryan, Little People’s Executive Director.  “Applebee’s has long been a strong supporter of the tournament with its Closest to the Pin contest, and sponsorship ofthe Parent-Child and associated events solidifies their belief in junior golf and Little People’s.”

“Applebee’s has been part of Little People’s in Quincy for fiveyears and really enjoys the partnership with this great event,” stated Kevin Allardice Managing Partner of The Bloomin’ Apple, LCC, franchisee of Applebee’s.  “I love seeing the lifelong bonds this parent-child event brings to the Quincycommunity.  We proudly support the Little People’s Golf Championships!

“We are happy to continue our sponsorship of the Closest to the Pin Contest and the Parent-Child event,”  added Allardice.  “As a golfer myself, I am extremely happy to help up-and-coming young golfers in the hopes that we may see them in the pros in the future.”

Zack Kaneshiro came to Pepsi Little People’s from Hawaii as a 13-year-old, and it made a lasting impression on him.

A recent email from Zack’s father Bryan, says,  “We would have never imagined that since Zack’s first mainland tournament to the Little People’s Championship, how much it inspired him to better his game.

“Since then he’s been fortunate enough to qualify and compete in the Optimist at the PGA nationals represented Hawaii at the Hogan Cup in Portland, Junior Worlds, US Junior Amateurs, AJGA events, FCG events, The Big I, and even played for Hawaii’s team in the Asia Pacific Cup in Japan.”

Bryan add kudos for Little People’s, saying, “The Little Peoples Championship is so well run and such an enjoyable experience that it sparked a light for Zack. He learned to love the competitive spirit against people from all over the world, the life-long friendships and the joy of giving back.”

“Once again, thank you Nan. Your Little People’s Championships and the community of Quincy are a blessing for everyone who’s been able to experience your hospitality! Life long memories for sure.”

Zack is now starting his Junior year at Santa Clara University and has been offered a scholarship to play on their golf team.

Congratulations Zack!!  And thanks Bryan for the update on Zack’s golf, and for your kind words about Little People’s!!  We all wish Zack the greatest success. 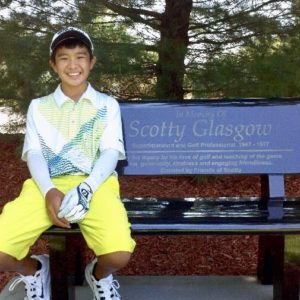 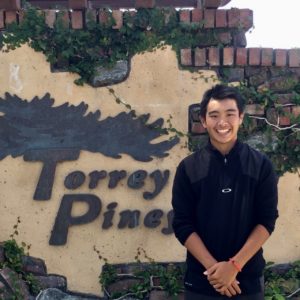 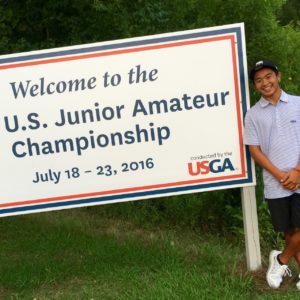 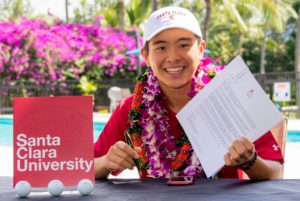 Kanon Kendrick of Shelbina, MO, and Anna Nacos of Dubuque, IA, were the 7B and 7G winners in the 2019 Pepsi Little People’s/State Farm Youth Classic Grand Champion event.

The scores of golfers who played in both the Pepsi Little People’s in Quincy, IL, June 18-19, and the State Farm Youth Classic in Bloomington, IL, the following week, are combined to determine the Grand Champions.

Congratulations to these four fine golfers.

The Sunshine Tour is a men’s professional golf tour based in Southern Africa, and Pepsi Little People’s is proud to have five former players regularly competing in those events.

Recently, Deon Germishuys from Cape Town, SA, finished 8th in the Royal Swazi Spa Challenge.
Another event on the Tour is coming up July 31-August 2, and five former Little People’s players will be competing, Deon Germishuys, Jade Buitendag from Queenstown, Dylan Naido from Johannesburg, MJ Viljoen from Bloenfontein, and Haydn Porteous from Johannesburg.
Nan Ryan, Little People’s Executive Director, recently received pictures of Deon from his father, Bernard — here’s Deon as a 7-year-old when he played in Little People’s, and Deon now, on the Sunshine Tour.  That’s Deon on the right. 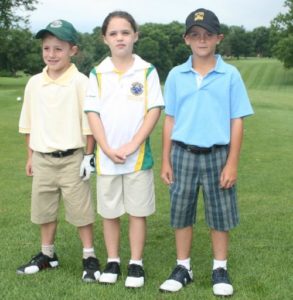 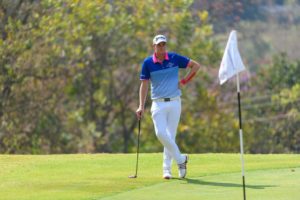 Nan Ryan, Executive Director of the Pepsi Little People’s Golf Championships, caught up with Quincyan Luke Guthrie as he was playing in the TPC Colorado Championship at Heron Lakes on the Korn Ferry Tour.  Nan also saw Luke’s wife, Kaitlyn, who along with her sister, also played in Little People’s, and ran into Ryan Morrison and his parents. 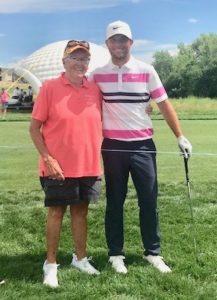 Abby Marting and Ali Schrock are the first winners of the Maureen J. Garrity Scholarship for Women, established to honor Maureen J. Garrity, a long-time supporter and volunteer with Pepsi Little People’s Golf Championships, who passed away December 23, 2018.

This merit scholarship was established to support the education of women who participate in the Pepsi Little People’s Golf Championships.  Each of the winners received $1500.

Garrity spent 34 years at the University of Colorado School of Medicine, and was particularly impactful in supporting student-led programs on social determinants of health, leadership and community service.

The MJG Scholarship is ongoing and will be available to young women who will be graduating in 2020 or 2021 and who will be participating in the 2020 Pepsi Little People’s Golf Championships. 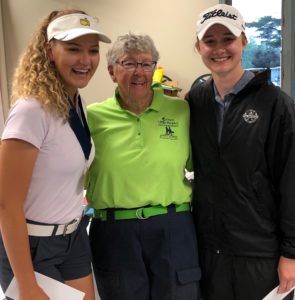 What an honor to have a tree planted in my name!!!  Thanks to my good childhood friend, Anne Musolino St. John, who heads up Trees for Tomorrow, a tree was planted in my name in front of the Quincy Museum on Maine Street, with the inscription “In Honor of Nan Ryan, Pepsi Little People’s Golf Championships”.  A forever reminder to the people of Quincy and its visitors about the tournament which has brought so much to the City’s economy.  Thank you Anne! 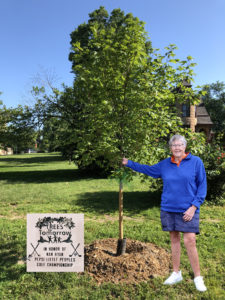 Grace Stafford, 14, of St. Louis Mo., is the recipient of the George T. Berry Sportsmanship Award for Girls, at the 2019 Pepsi Little People’s Golf Championships.

“Grace read about the Applebee’s Parent-Child event, a part of the 2019 Pepsi Little People’s, and was excited to play with her Dad, Paul Stafford,” explained Grace’s Mom Katie. “But after her little sister Charlotte, who was not playing in the tournament, asked to play with her, Grace decided to enjoy the Sunday tournament with her younger sister, knowing that it would probably change the outcome of her team score.”

Grace realized that it isn’t all about winning, but is about family and fun in the sport.

“Grace has been a wonderful role model and guide for her sister,” said Katie, “while also working hard to improve her own game.”

Grace’s act of selflessness by playing with her sister rather than her Dad is a great example of what sportsmanship is all about. Congratulations, Grace!!

This Sportsmanship Award is given to a girl participating in the tournament who shows good sportsmanship. The Award is named for Berry, father of Nan Ryan, Founder of the Pepsi Little People’s Golf Championships. 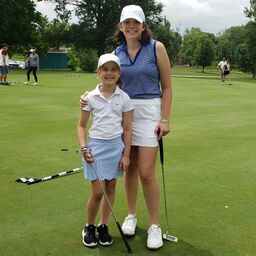 Hayley (Meyer) Tomazic from St. Louis, played in Pepsi Little People’s in the 1990s, along with her sister Kelsey and brother Jack.  Here is her memory of Little People’s:
“The Little Peoples tournaments are some of our favorite family memories growing up. We always enjoyed the parent/child tournament, bbq and of course the competition. It was such a great place to connect with other golfers from different places and enjoy a fun yet competitive atmosphere. Now that my kids are old enough to play in the tournament, I am thrilled to be able to share this tradition with them.”          Hayley’s 3 year-old son Fitz and 6 year-old daughter Aubrey will be playing in Little People’s 2019 for the first time.

Dr. Garrity passed away December 23, 2018, after a long and courageous battle with breast cancer.

Maureen spent 34 years at the University of Colorado School of Medicine, and was particularly impactful in supporting student-led programs on social determinants of health, leadership and community service. Her impact on students, faculty, staff and colleagues across the country was truly amazing and leaves an immeasurable legacy of educators, physicians, leaders and friends.

For 16 years, Maureen was a year-round volunteer for the Pepsi Little People’s Golf Championship, and could be seen during the tournament working on her computer, taking pictures, and cheering on the players.

This merit Scholarship was established to support the education of women who participate in the Pepsi Little People’s Golf Championships.  The recipient should be a high school junior or senior, graduating in 2019 or 2020, with an unweighted grade-point average of 3.5 or above, who intends to pursue a college degree, and who competes in and completes the 2019 Pepsi Little People’s Golf Championships.

This Scholarship will fund the recipient in an amount between $1500 and $2000 for her continuing education, as indicated in her personal statement.

For information and application, please email Nan Ryan, LPGC Executive Director, at ryannan@me.com.  Completed application and associated documents must be received by the Little People’s office no later than May 24, 2019.