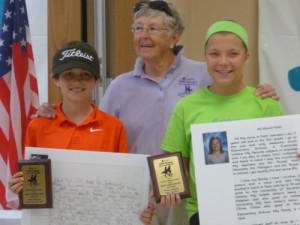 The Mission of the Little People’s Golf Championships Association (LPGCA) is to provide a positive competitive environment for junior golfers ages 3 through 18 through the Pepsi Little People’s Golf Championships, and to assist in the growth and development of every young man or woman who seeks quality competition and/or a college scholarship through golf.

By dedicating itself to this purpose, the Pepsi Little People’s Golf Championships has built a reputation as one of the largest junior tournaments, and is the longest continuously running golf tournament in the World for golfers aged 3 through 5.

Since its inception in 1974, the LPGCA has pursued this mission through the Pepsi Little People’s Golf Championships, scheduled the Monday, Tuesday and Wednesday following Father’s Day each June. With the addition of the Applebee’s Parent-Child and associated events on Sunday preceding the tournament, the LPGCA has created Little People’s Golf Week to provide even more quality competition among junior golfers.

Pepsi Little People’s is included in the AJGA Performance Based Entry system for boys/girls 14-18 and 12-13 age divisions, with Performance Stars awarded in those age divisions.  It  is a qualifier for the IMG Academy Junior World Golf Championships,  Future Champions Golf, the Regional for the National Notah Begay National Championship and the PLAY Junior Golf Tour in Canada. It is a ranked tournament for the Junior Golf Scoreboard, the  GolfWeek/Sagarin Junior Rankings and the Global Junior Golf Rankings.

In keeping with its dedication to help young people, the LPGCA has established its “Kids Helping Kids” program, which encompasses (1) Little People’s Charitable Program, in which  proceeds from the tournament go to local and national charitable organizations involving young people, (2)  Little People’s Scholarship Program, which provides scholarships for boys and girls who otherwise would not be able to compete in an international junior golf championship, and (3) Maureen J. Garrity Scholarship for Women,   (See Scholarships)

The LPGCA is a 501 (c) (3) not-for-profit organization established under the guidelines set by the Internal Revenue Service. Contributions to the Association are tax deductible by both individuals and corporations. It is governed by a nine-person Board of Directors elected by its 26-member volunteer Advisory Team, and is headed by Founder/Executive Director/President Nan Ryan.