A WOMAN’S ADVENTURE IN THE ARCTIC
by Nan Ryan 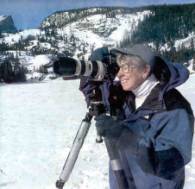 If anyone had told me ten years ago that in 1998 I would be photographing polar bears in the Arctic, I would have said they were crazy.

Ten years ago I was happy (I thought) working three jobs, content to be in ‘the middle’ in Quincy, IL. I didn’t like to fly. Then I signed up for a hike and bike trip with my daughter in Colorado, and life changed. I had loved Colorado as a child, going to camp there, and later, to college.  We took our children there when they were very young, but I hadn’t been back.

The Colorado bug bit me that week, but more important, it instilled in me the urge to travel.  I decided if I wanted to ‘see the world’ I would have to ‘learn’ to fly.   I took another hike and bike trip to Utah with a travel group the next year.  I  entered a seven-mile race in Iowa, and started returning to Colorado to hike in summer, to snowshoe in winter.  I bought a camera and telephoto lens and started taking pictures. At the age of 60, I was ready for adventure!

There were photography trips to Yellowstone in winter, to Yellowstone in fall, to Pennsylvania for colors.  A friend who had been to Churchill, Manitoba, the polar bear capitol of the world, said “you must go see the bears”.  And so I did.

The Arctic is a magical place, cold and stark, sometimes like a good black and white photo, other times warmed by dancing Northern Lights overhead.

In 1998 I made my second trip to Churchill.  From St. Louis, I flew to Minneapolis and then to Winnipeg.  The next morning I joined some of the 40-some others who were going to see and photograph the great crystal bear in his natural habitat.  We boarded a twin-motored Hawker for the three-hour flight to Churchill, a town of about 1000 on Hudson’s Bay, where it is not uncommon to see a polar bear starring in the kitchen window.

No roads lead to Churchill.  Access is gained by plane, train, or dogsled. 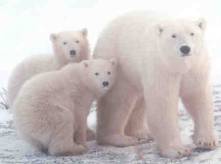 We landed in time to browse the local shops, the Arctic Trading Post, Northern Images and Tundra Buggy shop, before dinner.   Because Churchill is built on the polar bear’s migration route, one always stays alert for the great white bear that just might happen to wander into town.  Polar Bear Patrols scout the area.  An adventurous bear is put into ‘bear jail’ until it can be transported out onto frozen Hudson’s Bay by truck or helicopter.

The next morning we boarded a bus for the ride to ‘launch’, where we climbed aboard a tundra buggy for the rough ride over no roads to Camp at Gordon Point, about halfway between Churchill and Cape Churchill.  Camp, a series of railroad-type cars hooked together, was to be our home for the next eight days; a tundra buggy our vehicle for scouting bears and other Arctic wildlife. 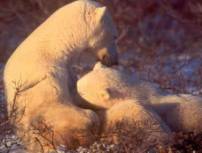 A tundra buggy is similar to a large school bus mounted on huge wide tires.  My 5’-8-1/2” height fit comfortably under the buggy on the rare occasion when there were no bears around and we could get onto the ground.  Inside are seats, a heater and a small non-flush bathroom area.  Windows open from the top down so bears can not climb in.  A deck, surrounded by a solid metal fence, provides an outdoor viewing area from the end of the buggy.

Each day started early when the generator in the train was turned on about 6:15 am.  Some of us avoided the early morning rush of 20 people in one bunkhouse using two bathrooms by brushing our teeth early by flashlight; sometimes with no running water.  Each bathroom provided a non-flush toilet. The one shower in each bunkhouse had a sink and shower stall, both with hot and cold running water.  You just never knew which it would be!

A hearty breakfast got us off to a good start as our group of 12 boarded our assigned buggy for a day of searching for wildlife.  Usually, we didn’t have to look far, as bears congregated around camp each evening, hunkering down in the nearby willows, and rising to playfight in the chilly morning air, their breath forming white clouds against the reddish-brown willows.

Occasionally we found and followed a mother and cub.  We would be patient, as mom led her cub through the willows to a napping place; waiting until they arose again to play, roll in the snow, or become curious with our buggy.  Often the mom would sit patiently while her COY (cub of the year) or two-year-old inspected the buggy, standing on hind legs sniffing.  You wanted to reach out and pet him – until you remembered that these bears had not eaten for four months and were very hungry!

We were fortunate that year to see and photograph several nursing moms, a sight seldom seen, especially at close range, by anyone.

Often as a mom and cub were napping, the mother’s head would suddenly raise, her black nose twitching as she sniffed the air – a male was near!  A hungry male will search out cubs for food, but mothers are brave, and will chase off a male twice her size.

Bears were not the only wildlife on the frozen tundra.  Arctic foxes cavorted across the ice and through the willows, searching for food, sometimes leaping for a lemming buried in the snow.  On the ground when no bears were present, we would sit quietly with our cameras, as a fox became curious, sticking his nose into the lens, or nipping our boots.

Wonderful things fly through the air in the Arctic.  A Snowy Owl sitting near the willows allowed us to get close enough to photograph.  He flew to a branchless tree, appearing to be impaled on the top, then majestically fluffed up, spread his wings and soared off across the frozen water to a hidden spot.

Too soon the day was over, the sun dipping below the horizon at 4 pm, leaving golden light and silhouetted bears on the frozen landscape.

Heading back to Camp, bouncing over frozen ponds and snow, we remembered other magical days,  bears, owls, foxes and ravens, Hudson’s Bay changing from waves to frozen ice, waiting for the bears to come searching for food – seals.

As the sun set and darkness enveloped camp, we made our way to the bunkhouse where we compared our day and sightings with our neighbors from other buggies.

Then off to dinner, walking through the next bunkhouse, the lounge, to the kitchen/dining room, where we enjoyed a wonderful meal cooked for 60 people in a space no bigger than four phone booths.

Each night we enjoyed a slide show presented by one of the professionals photographers on board, or a talk by a naturalist.

The Muktuk Lounge, located at the opposite end of the train from the bunkhouses, was open with wild music for dancing, or socializing.  But it was an early night for most, eager to see what the next day would bring.

As I walked back to my bunkhouse, I looked out the window at bears romping and playing in the snow, attracted by the odor of food.  Passing through the open space between cars, snow and frozen ice particles stinging my face, I looked overhead at the Northern Lights swirling green and yellow across the Arctic sky.  I breathed the sub-zero air, thinking, could there be a more magical place?

Sleep came easily, and soon it was morning, another day to search for the beautiful Arctic creatures living in the frozen tundra.

Too soon it was time to board the buggy that carried us back to launch, the bus to the airport, and the small plane that would take us back to civilization.  Too soon, it was time to leave this spiritual place that changes your life forever.