The Trip of a Lifetime….St. Andrews in September

The setting was the Little People’s Annual Picnic on June 16.The announcement, presented by Pepsi’s Roy Nelson, read,“Refreshment Services Pepsi is announcing that Nan Ryan should be packing her bags.You are attending Sun Spirit Golf Tours of Scotland by Lange Cup, St. Andrews, Scotland, September 13-21, 2003”.

What a wonderful way to be honored for 30 years of doing something I love to do…run the Pepsi Little People’s Golf Championships!

Now I am back from that awesome adventure, and will share my experience with all of you.

The first eight days of touring Scotland in a rented black Jaguar (upgraded by Hertz because of much delay), included Stirling, Inverness, the Isle of Skye, where we saw Highland Cows, and sheep being herded down a ‘single track’ road by dogs, Loch Ness Golf Club, Royal Dornoch Golf Club, Dundee and Carnoustie, before arriving at St. Andrews on Saturday, September 13.

There I met the other 29 Sun Spirit ladies, coming from California, Colorado, Indiana, Minnesota, Michigan, Connecticut and Massachusetts.We made up the Red and Blue teams which were to play matches at St. Andrews for the Lange Cup, in the Solheim Cup format.I was a member of the Blue team.

St. Andrews Links is owned by the townspeople, and consists of six golf courses.

The Old Course – most famous of all – is closed to golf on Sunday to let the residents and tourists wander the course and picnic on the grounds.We were able to see the bunkers and rolling greens, and imagine what it would be like to play there.

At 6 pm, the two teams, dressed in khaki slacks and either red or blue shirts, met at the Old Course for our Opening Ceremony.We formed lines and followed a bagpiper down the first fairway, the R&A Clubhouse in the background.

Monday was a practice round on the Jubilee Course, which is the longest of the courses at some 6000+ yards for ladies.I was fortunate to have a wonderful caddie, Jimmy, without whom I would have been in many more bunkers and deep into gorse!Because of him, I was able to avoid the gorse in each round and did not lose a golf ball!!

We had the opportunity following the practice round to play the Himalayas Putting Course, also a part of the St. Andrews complex.This is 18 holes of rolling greens, and is packed with people most of the time. 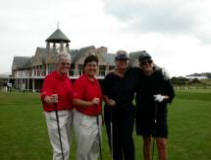 This was followed by the Opening Dinner in the Alexander Room of The Scores Hotel, where we stayed – only a wedge shot from the 1st tee at the Old Course.

As I was waiting to tee off for the practice round, I heard my name, turned around, and discovered that two former Little People’s players were standing there!!What a wonderful surprise to see Kelly Husted (now a sophomore at Stanford), and Amber Prange (now a freshman at Washington)!!!The two college golf teams were in Scotland for 10 days of golf prior to the opening of school.

Our first match was Tuesday at the New Course (built in 1895), playing a Four-Ball format (Best Ball).My partner Pam and I were able to tie the match on the 18thhole for ½ of a point.The New Course is slightly shorter than Jubilee, but also slightly tighter, demanding accuracy to stay in play.

Wednesday’s match was a Foursomes format (Alternate Shot).My partner Diane and I were unable to win from Susan and Sherrie, but we enjoyed playing the Jubilee course again.At that point, our Blue team was slightly behind the Red team in points.

Thursday morning, we were fortunate to see Prince Andrew play his way in as Captain of the R&A, accompanied by a booming cannon!He hit a tremendous tee shot off the 1st tee of the Old Course, which was scrambled for by the caddies.When the victorious caddie handed the ball to Prince Andrew, he was rewarded with a gold coin.

The final day was the Singles format, played at Jubilee, and I was able to defeat my opponent, Letitia, another LPGA golf professional, to add a point to the Blue team.Unfortunately, our team lost to the Red team by the same score as the US ladies lost to the Europeans in the Solheim Cup Matches.

For me, the event was not about winning or losing.It was the totally awesome experience on playing golf where golf has been played since the 1400s.I know I had a grin on my face the entire time. I could not believe I was actually there, playing this great game in The Home of Golf!

On Friday I had the opportunity of visiting Barry Kerr’s shop where hickory golf clubs are made, and then was able to hit balls with hickory shafted woods and irons.What an experience!That night we ate dinner with the Keepers of the Green Society at the St. Andrews Clubhouse.And that was where I learned that my name had been drawn in the lottery to play the OLD COURSE on Saturday!!! A dream come true!

The day dawned cold, dreary and rainy.My tee time was 3:10 pm.I spent the morning wandering through town, then visited the Balgrove Course where a Wee Wonders tournament was being played.When I walked into the clubhouse, I was delighted to see Will Chambers and his father Gordon, from England!Will has competed in Little People’s the last two years, and was in St. Andrews, having qualified for the Wee Wonders.

About 2:30 the rain stopped, and I was on the 1st tee of the Old Course, excited beyond belief to actually be there.My caddie, Jimmy was there, havinggiven up his Saturday fishing date with his grandchildren to caddie for me.

I was last in our group to tee off, and as we walked down the 1st fairway, the sun broke through the clouds, a double rainbow appeared and a bagpiper was playing.It could not have been more perfect.The course was fantastic, and I did visit several of the bunkers, which were taller than me.And it did take several shots to escape!!

As the sun set over St. Andrews, we walked up the 18th fairway, over the Swilken Bridge, to the 18th green.A perfect ending to a magnificent experience. 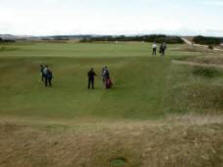 Sunday found me returning to Glasgow, Newark, Providence and eventually to Denver and Estes Park.I still can’t believe this really happened…but I have the memories and pictures to prove it.

I cannot thank the Pepsi guys – Roy, Ron, Randy and Jerry – enough for making this trip of a lifetime possible.